Is LOVE worth the risk?

He might be the wrong man to protect her…

Marlene Parks has struggled to the top of her career in Hollywood, but with a heavy heart. Her father and her older brother died in battle. Now at the pinnacle of her career, former military Garrett Flynn becomes her protector when a ruthless killer comes after her—but why?

Ex-Navy SEAL Garrett Flynn is employed by Stealth Security to protect celebrity clients. He’d planned to meet Marlene, the younger sister of a marine who died in battle. When he shows up at one of her charity events, a shooter’s sudden attack compels him to be the gorgeous movie star’s bodyguard. Yet a secret haunts him, and he fears it’s the clue to why the killer is after Marlene.

Garrett must rescue Marlene, and save her from the cold peril she faces. He’s the only man who can.

While Marlene tries to keep her life together and film a movie that could make her career, the pressure builds as the killer’s attempts on her life escalate. In close proximity to her sexy bodyguard, and drawn to his alpha personality, Marlene’s attraction blossoms. Is it a bodyguard crush or something deeper? She vowed not to get emotionally involved with a military man. But will her heart listen? 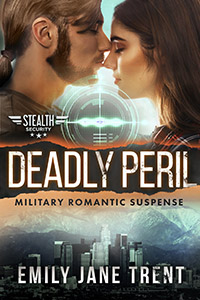